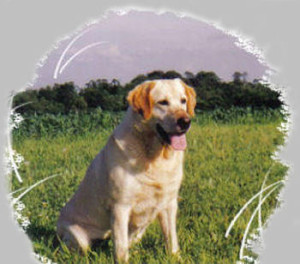 KANDI was our second Labrador. She was purchased from a couple that I met at a dog Show and after talking with them I found out they had the bloodline I was very interested in. Sandylands was the bloodline. The reason for my interest was due to the fact that they bred their dogs for looks based on the standards set forth by A.K.C. but they also expected the hunting drive, and desire to be there also.

During a U.K.C. Hunt one of her birds went down in the woods. The Judges were going to call a NO BIRD and have her do it over. I knew she was not going to forget it because she heard it drop through the trees. I chose to send her for it and after a few moments she came out with the bird and we proceeded to finish the rest of the test. She received a great round of applause.

She was a great dog to look at and when you were hunting or training her you always got your bird. She never gave up.