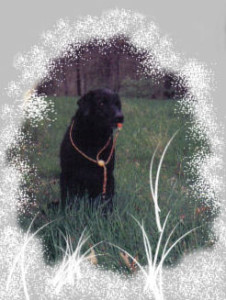 DYLAN was the third Labrador we decided to add to our family. It wasn’t that we were looking for another one at the time. I just happened to run across an ad that really caught my attention. From being involved with the Labrador breed I wanted to learn as much about them as possible from the Show side as well as the Field side. Through reading I learned that the English bloodlines were some of the best around. The ad that I read was about a litter of pure English bred pups. Both parents were brought here from England. The litter definitely had my interest.

After meeting the breeder and learning all of the facts about the history of this litter we left owning another Labrador. This was a black male that we named DYLAN And as time went on he became my best friend.

DYLAN went everywhere with me and we both enjoyed each other’s company no matter where we were. Where you saw one you saw the other whether it be just lounging around the house, or out in the field hunting, or training. DYLAN loved to please and lived to hunt. He was very easy to keep under control, and his intelligence proved to be that of a straight-A student. His memory will live with me forever.
I WILL NEVER FORGET HIM.